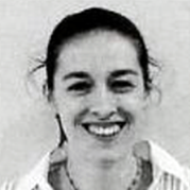 Every coach wants to find that next piece of the puzzle to elevate the team and lead to more wins. During the early 2000s, Brenda (McDonald) Keim g04 was that piece for the Lady Falcons volleyball team.

Brenda was one of the stepping stones crucial to the celebrated success of the women’s volleyball teams in 2004 – 2006. “Brenda, along with many others, are the foundation the three Hall of Fame teams . . . were built on,” Coach Scott Haddix g94 said. “Those players all played their part in the success that was to follow.”

An out-of-state student from Michigan, Brenda was one of the volleyball team’s first recruiting successes. Thanks to the hard work of such players as Amanda (Chapman) Dunaway g99 and Khristina (Peppas) Hoch g04, the school’s athletic department had started to become more attractive to talented players. Brenda came in with a good class of players, but her talent and experience set her apart as an obvious game-changer for the team.

When Brenda visited campus for tryouts, it was obvious within five minutes that she brought precisely the skill, knowledge, and pace of play that the team needed. Her movements were effortless and instinctive. “It was super apparent that Brenda was the type of player we needed to add to our roster,” Scott said. “There may have been other athletes in that tryout, but she is the only one I can recall seeing during that hour.”

Competition brought out Brenda’s fiery passion to win. “It showed on her face, in her walk, in her play,” Scott said. “Winning wasn’t an option, a hope or a want . . . . It was the point.” As a freshman, Brenda finished in the top 10 in the nation for attack percentage. She constantly pushed herself to get a kill, make a block, or score an ace. Yet, she was patient with those around her. Winning is a process for a developing team, and Brenda used her abilities to serve and inspire her teammates as they faced tougher opponents each year.

During Brenda’s tenure, the Lady Falcons quickly progressed from their first winning season in 2000 to perform stronger each year. The team qualified for the USCAA National Tournament in Dallas, TX two years in a row in 2001 – 2002. In 2003, Brenda’s senior year, the team went 19-15 in the regular season and hosted their first national tournament, winning four out of six games.

Brenda graduated from TUFW with BA in youth ministry. She went on to complete an MBA at Indiana University – Purdue University Fort Wayne and has enjoyed a 14-year career with FedEx. She married Josh Keim g04 in 2005, with Scott Haddix officiating. Brenda, Josh, and their four children reside in Westervill